A large part of your golf game will involve golf irons. In fact, irons usually make up more than half of the clubs in the set of 14 clubs allowed for regulation play. Irons, like woods, are numbered clubs ranging from 1 to 9. Note however most golfers now use hybrids in place of the 1 and 2 irons as they're generally views as easier to hit. Irons are also one of the most versatile clubs in golf and can be used anywhere from the tee on short holes to the fairway to challenging hazards like bunkers. So, using the best Irons and Iron Sets is vital to achieving the best golf game possible. Golf iron Innovations from top manufacturers like Cobra, Callaway, TaylorMade, Titleist, and more can help improve accuracy and distance on every swing. Our competitive pricing makes us a great choice to tee off your holiday shopping for Black Friday or Cyber Monday.

What are cavity back irons? 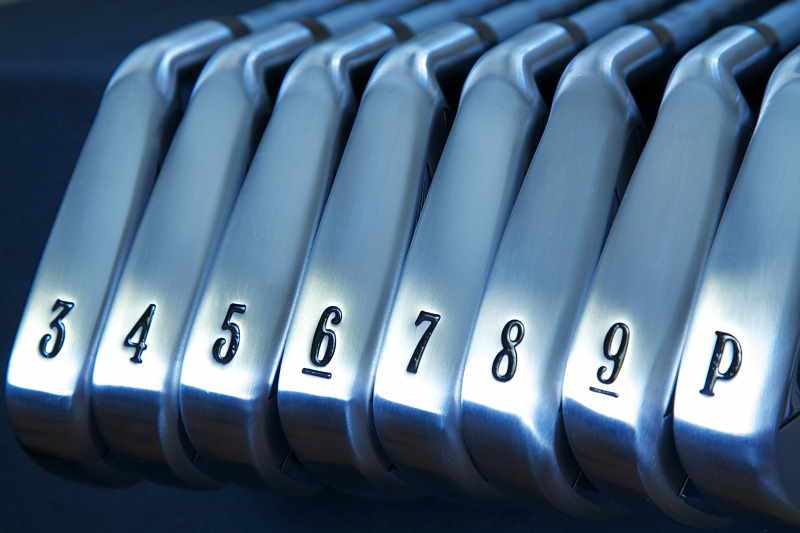 Cavity back irons have a hollowed-out area on the back of the clubface allowing for the redistribution of weight from the center to other parts of the clubhead, like the toe and heel. When the weight is redistributed lower on the clubhead, for instance, it can lower the center of gravity, allowing for a higher launch angle in relation to the club's loft. In general, cavity back irons can be more forgiving on mis-hits due to a larger "sweet spot" on the clubhead face.

What are muscle back irons or muscle blades?

In contrast to cavity back irons, muscle backs have a fuller back area on the clubhead. The muscle back clubhead is also the more traditional clubhead design of the two. Since the weighting of the clubhead is more central, the muscle back can be less forgiving on mis-hits. So, in general, more skill is usually required to get the best shot performance and accuracy from a muscle back design.

Are cavity back and muscle back the only types of irons?

No. In fact, most modern irons and iron sets fall somewhere between the two, borrowing aspects from both types of clubhead designs.

What are game improvement irons?

"Game improvement irons" typically have more perimeter weighting and a wider sole. These irons are usually targeted at casual or novice golf players since they can be much more forgiving. And, since they are more forgiving, a game improvement iron set can help get the ball in the air more accurately and consistently on poorly hit shots, potentially lowering a player's score.

Why is face flexibility a valuable feature for a golf iron?

The ability of the iron's clubface to give a slight impact can help deliver a straighter shot with more velocity. A great example of this is the TaylorMade SIM Max Irons. These irons and iron sets feature an innovation called a Speed Pocket. The Speed Pocket disconnects the bottom of the face from the sole allowing for a free-floating face. The result is greater ball speed and forgiveness.

★★★★★
By Blake
Sioux City
July 20th, 2021
Excellent Clubs
The Cleveland Launcher HB Turbo iron set is ideal for a casual golfer. Playing these irons, you can expect much more loft as well as forgiveness with miss-hits. And of course, Rock Bottom Golf's customer service is top-notch.
★★★★★
By Dukeameye
Virginia
June 29th, 2021
Deal too good to pass!
2 day free shipping so from purchase to first swing was quick. Beautiful 7 iron set 5 thru 11. Was torn between Honma and Callaway Mavrik. Honma Graphite shalfs, 7 irons and better price was deciding factor. I love the irons, replaced Callaway N415's.
★★★★★
By Sheri
NH
May 31st, 2021
Awesome set... I love them!
I recently upgraded my beginner clubs to the Wilson Deep Red Maxx and what a difference! I already had the Deep Red Maxx Driver, 3 & 5 woods, and 3 & 4 hybrids which I had recently purchased new not long before I got the full iron set to go with them from RBG. Now the only clubs in my bag that are not Deep Red Maxx are my 60? deg. lob wedge & putter. Rock Bottom Golf shipped them very quickly and they arrived wrapped in their factory plastic on each club and in a factory sealed box. The service from RBG was fantastic & I will purchase from them again!
★★★★★
By 3puttLefty
Virginia
May 8th, 2021
Great set of irons
Had to let go of my 13yr old Big Bertha iron set and went with these TM SIM2 Max OS Irons. Hit several brands but had trouble hitting any consistently until I found the SIM2 OS. Oversized like my old Big Bertha - I immediately was more comfortable hitting these. Well balanced club that I am getting a ton more distance out of on each club which has caused havoc my first few rounds.
★★★★★
By Scott
Nebraska
April 3rd, 2021
Worth every penny! Beautiful classy look too!!
First let me say I haven’t played consistently for 10+ years (life happens) but wanted to get back out there. With all the advancements in technology I knew I should spend the time researching iron sets so I have spent the last two months reading and watching reviews on all the game improvement and super game improvement irons out there. I looked at all of the Taylormade M series irons, last years Sim Max, all of the Callaways - Rogue, Mavrik, Bertha’s and even the newer Titleist T300s before I finally settled on these Taylormade Sim 2 Max and WOW I’m glad I did!!! I’m what you’d consider a high handicap in the 22 range, just as a point of reference for those of you who actually read reviews from those of us who are the same ability - not the professional testers on YouTube. After taking these to the range I am super jacked! I’ve never hit as straight and as LONG as I did with these irons!! The look is extremely classy - not over the top like some of their older models. I obviously took a chance and was a little nervous spending the money having never swung them but we don’t have anywhere to test clubs where I live within 250 miles so that’s just the way it is. I definitely recommend these to anyone who wants to improve their game or who has a tough time hitting it straight!! And kuddos to Rock Bottom with their home in 2 days shipping - they were delivered as promised!! Thanks Taylormade for helping make the game fun the second time around!!
★★★★★
By Dale
Ocala, FL
December 17th, 2020
Nice game improvement iron set
I wanted to get back to a game improvement iron set with less offset and more traditional lofts. Did some research and found that the Bridgestone Tour B JGR HF2 irons were very highly rated by a number of club reviews. RBG had this set at a great price so decided to give them a try. So far, I'm very pleased with the performance and feel. It's nice to be hitting a forged club again!
Back To Top